Disparity is hard to ignore when it comes to geography, status, culture and language in France’s overseas territories. But this diversity is at odds with the first paragraph of Article 2 of the French constitution: “The language of the Republic shall be French”.

Seventy-five official languages are spoken in France’s overseas territories, of which just over fifty are considered “languages of France” by the General Delegation for the French Language and the Languages of France (DGLFLF), a unit of the Ministry of Culture and Communication. 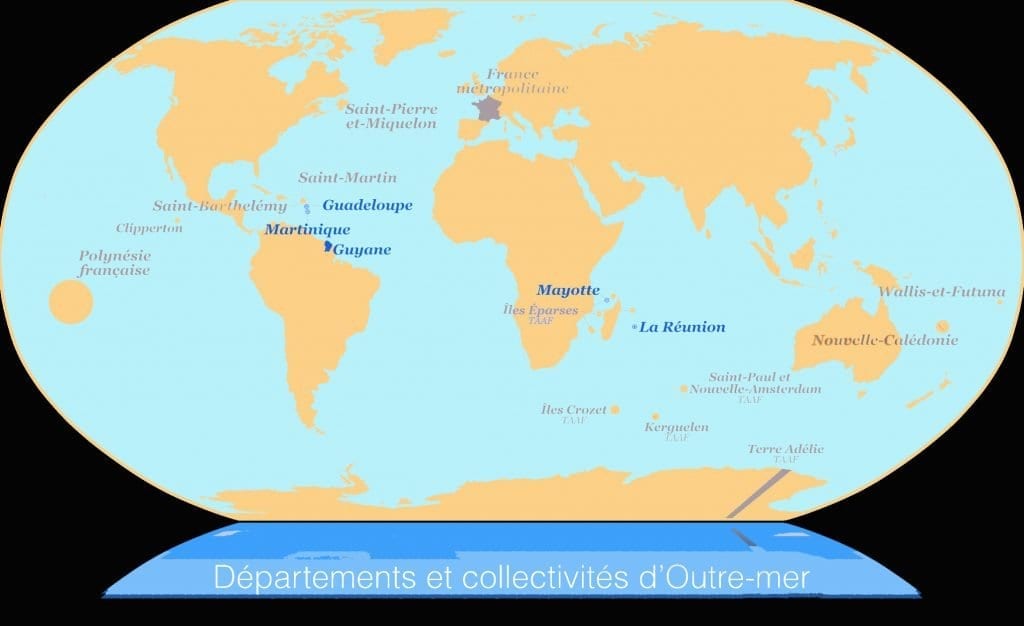 Fought on many fronts and generally misunderstood by the dominant societies until the mid-20th century, these languages owe their survival only to the mobilisation of populations determined to safeguard their respective cultural identities Among the methods employed in this struggle, song, music and dance have proved to be particularly effective tools. Encouraged by the mass decolonisation of 1960, identity resistance movements stirred the three large Creole-speaking islands that became départements in 1946. Their claims were expressed through folk arts in particular, which had the gift of repulsing the dominant local minorities, subjected to metropolitan acculturation.

In Guadeloupe, the gwoka was mocked, seen as “mizik a vié neg”, the equivalent of “savage music”. In Martinique, the bèlè was banished almost entirely from the public space. In Réunion, the rhythm, dance and song of the maloya were practised in secret in the society of “Cafres” (Blacks). It was played during “servis kabaré”, evening festivals, funerary vigils adapted from sacred Malagasy rituals celebrating ancestors. The trance phenomena that sometimes resulted from these drum dances disgusted the elites. So, it was in hiding that the cultural identities specific to Réunion, Guadeloupe and Martinique were reborn. And when the revolutionary wave of May 1968 reached France’s overseas territories, the demands became more political.

In the 1970s, the strategy of the Communist Party of Réunion (PCR) consisted of rehabilitating the traditional maloya, which then came out of family and ritual settings to become a subversive catalyst, appearing on stage at municipal festivals. It was there that Danyèl Waro had his initiation, alongside his teacher Firmin Viry. In Guadeloupe, autonomist movements did not think twice about using plastic explosives in 1980 to support their demands. It was also this period that saw the explosion of Kassav’s zouk, the flag bearer for the linguistic and cultural dynamism of the French Antilles, ready to conquer the world. The individual identities of the archipelagos are expressed less in the 21st century by violence than by the mass involvement of the Antilles’ inhabitants. In 2014, the gwoka was added to UNESCO’s list of intangible cultural heritage (ICH), where it joined Réunion’s maloya, added in 2010.

The history of Pacific cultures differs from that of the Antilles and the Indian Ocean, where non-native populations were brought together, often as the result of slavery. At the time of its later colonisation, Oceania had been inhabited for several millennia by indigenous people. This was orchestrated by Anglican pastors who evangelised hand over fist, hence the influence of hymns in the vocal forms that survive to the present day. As with Native Americans, imported diseases cause devastation: 80% of the Kanak population had disappeared from New Caledonia by the end of the 19th century.

Kanak culture and languages owe their rebirth to the uprising of separatists. From 1984 to 1988, they succeeded in making an independent Kanaky, with its own government, a reality. It was a difficult struggle that ended in the massacre on Ouvéa, but led to the recognition of a people that had been oppressed for 135 years. It was the work of a man of culture, Jean-Marie Tjibaou, who paid for it with his life. In each Kanak clan that had its own music and dance, this unparalleled leader had convinced the elders to allow the young to take hold of the clans’ heritage to create modern music: kaneka. Since then, radio stations and K7 would get people dancing to almost forgotten languages.

Everywhere in the overseas territories, the trend is now towards “balanced multilingualism”. The state and communities alike implement policies aimed at supporting local languages and cultures. Zouk, gwoka, bèlè, maloya and kaneka have revealed hitherto little-known cultural identities to the ears of the world. Soon, advanced forms of Mayotte’s m’godro and Guyana’s aléké will emerge. A diversity of styles and languages capable, let’s hope, of keeping the frantic globalisation of a pseudo-culture that has a tendency to standardise art as well as thought at bay.